Past Miracles Fuel Your Faith for Today's Needs!

If you've ever had to stare death, crisis, calamity or any other attack of Satan in the eye, then you know that if you are not built up in the Lord, he'll use them try to crush and overwhelm you and undermine your faith. He'll use them to try to get you to forget what God has done in the past for you. What God has done for you in the past is supposed to be the fuel to strengthen your faith and trust in God today and in your future. The undermining of our faith is a strategy that Satan has always used against us and it's not going to change! Satan uses doubt to invade your heart and emotions like water seeping through cracks. He does so attempting to undermine your faith much like he did with Elijah and a woman who had previously experienced God's miracles in their life.

God had sent Elijah to the house of a widow who had a son. There was a drought in the land and people were dying. This woman was out gathering sticks to cook her last meal for herself and her son. Their food supply was depleted and she had lost hope. She was expecting to die from starvation. At that time, God's prophet Elijah had crossed her path. He asked her for some food.  She explained her situation to him. He told her to make him a meal first and then after she could for herself and her son. He then proclaimed by the Spirit of God that her oil and flour would not run out until the drought was over. She believed Elijah and made him a meal. She then discovered that no matter how much flour or oil she used, it wouldn't run out. God was supernaturally making provision for her.

Then we come to these verses that describe a crisis at a later time in her life. 1 Kings 17:17-24 NIV “Some time later the son of the woman who owned the house became ill. He grew worse and worse, and finally stopped breathing. She said to Elijah, "What do you have against me, man of God? Did you come to remind me of my sin and kill my son?" "Give me your son," Elijah replied. He took him from her arms, carried him to the upper room where he was staying, and laid him on his bed. Then he cried out to the LORD, "O LORD my God, have you brought tragedy also upon this widow I am staying with, by causing her son to die?" Then he stretched himself out on the boy three times and cried to the LORD, "O LORD my God, let this boy's life return to him!" The LORD heard Elijah's cry, and the boy's life returned to him, and he lived. Elijah picked up the child and carried him down from the room into the house. He gave him to his mother and said, "Look, your son is alive!" Then the woman said to Elijah, "Now I know that you are a man of God and that the word of the LORD from your mouth is the truth."

Don't you find it interesting that she knew Elijah was a man of God after she saw him heal her son? Did she forget about that bottomless flour jar or the bottle of oil that never emptied? Didn't she see Elijah as a man of God through that miracle? I'm sure she did. Sometimes in crisis and devastation, we can become so overwhelmed that we forget everything God has previously done for us. That is what happened to this widow. This is Satan's strategy to bring us into unbelief and undermine our trust in God. 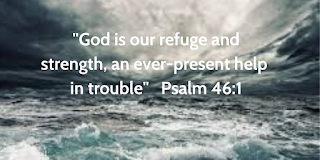 We can lose track of the fact that God has never left us. We often forget those past miracles in our life. Out trust falters but we can't let it. We don't have to blindly trust God. We trust Him because His Word promises us that we can. He is on our side and wants to deliver us from every evil attack of Satan. As the Apostle Paul said, in today's Fresh Manna verses, "... then we put everything into the hands of God, who alone could save us, for He can even raise the dead. And He did help us and saved us from a terrible death; yes, and we expect Him to do it again and again." 2 Corinthians 1:8-10 TLB

Don’t let the attacks of the enemy steal your goods! Have faith in God. Fight back! The Bible says “to resist the devil and he will flee.” Cry out to God but not in despair. Cry out to Him in faith and say, Father I know you are good and I trust you to deliver me from every evil attack of the wicked one. I thank you that you are always with me and will see me through this in Jesus name. Amen.  God bless you!