God's Plan for a World Drowning in Disrespect

The world we are living in today seems to be the most toxic world mankind has ever lived in. At least in our lifetimes, there has never been more toxic words and and greater disrespect shown to our fellow man than now. Let's face it. Politicians, comedians, news commentators and now, most of mankind degrade those in authority daily. It's easy to do. It's also a trap that helps infect our thinking and spark our own words of foolishness. Vice-President Mike Pence is one of those rare individuals that doesn't do this and is a wonderful role model for what I am going to discuss here today! 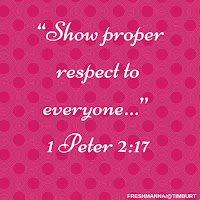 In God's eyes, every individual should be treated with respect. Even when they may not, in our opinion, deserve it. You mind instantly think of those who you couldn't possibly imagine respecting. But there's your key. I am not talking about respecting people. I am talking about showing respect to people. There's a difference! I believe you will see that as you read the verses that surround 1 Peter 2:17 which says, “Show proper respect to everyone…” Let's take a look.

1 Peter 2:13-23 NLT “Submit yourselves for the Lord's sake to every authority instituted among men: whether to the king, as the supreme authority, or to governors, who are sent by him to punish those who do wrong and to commend those who do right. For it is God's will that by doing good you should silence the ignorant talk of foolish men. Live as free men, but do not use your freedom as a cover-up for evil; live as servants of God. Show proper respect to everyone: Love the brotherhood of believers, fear God and honor the king. Servants, submit yourselves to those in authority with all respect, not only to those who are good and considerate, but also to those who are harsh. For it is commendable if a man bears up under the pain of unjust suffering because he is conscious of God. But how is it to your credit if you receive punishment for doing wrong and endure it? But if you suffer for doing good and you endure it, this is commendable before God. To this you were called, because Christ suffered for you, leaving you an example that you should follow in his steps. "He committed no sin, and no deceit was found in his mouth." When they hurled their insults at him, he did not retaliate; when he suffered, he made no threats. Instead, he entrusted himself to Him who judges justly.”

God instructs us do show respect for His sake! He can move in and through our lives when we do! He can help change the world through us when we do! God’s word teaches us that it’s important to show respect to every individual, even when they appear to be totally unrespectable.

First of all, it’s the right thing by God's instruction, and because in doing so, you protect yourself and your heart from becoming just like those that won't listen to God. Always showing respect to others promotes the development of great and godly character within you. It molds a leadership quality within you that is rare today. You become a person that truly reflects the love of God. We all hear stories of how God loves us despite how we act. When you treat someone with respect that is seemingly undeserving of it, you’ve show them a quality of love that God has shown us—even when we don’t deserve it!

Treating others with respect also helps keep a bridge in place with people who seem less worthy of respect—so that you might continue to influence their life. If you read about Joseph and Daniel and Nehemiah, you'll see three leaders and role models that lived this way. If you connect the dots, you'd realize that this proper attitude of showing respect helped create the favor that positioned them rise to the top and influence their world! That is what you are on this earth for—to influence others with the love of God in all the ways you can! Your hope should always be that your words and actions become seeds planted that eventually open the heart of others to the message of the love of Jesus, and to imparting godly influence.

Another reason to show respect is that it helps protect your faith. At times when you want to disrespect someone, it’s usually because of some wrong or bad thing they’ve done or said. That's a tempting time to let ungodly and disrespectful words flow. If someone has done or said something bad that would want to make you speak disrespectfully against them, then you would probably want them to change their ways. If you want them to change, you are the one needed to pray for them. Others might dislike them so much, they wouldn't consider praying for them. Maybe they can't stand the sight of them or even feel hate for them. If you pray for them but speak against them, there will be no faith behind your words. Your prayer of faith for someone needing to change is undermined by your words against them. It's like planting a plant and then digging it right back up! Prayers for someone, accompanied by words against them, are basically pointless. They become faithless prayers that bear no fruit. 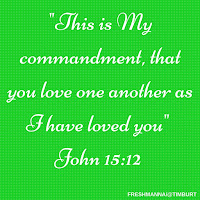 Showing respect—especially when it doesn't seem like it's deserved, is a crowbar in the hand of God to influence a disrespectful person's life for the good. Respect and honoring, coupled with kindness, is the most powerful set of tools of influence. If anything softens and helps touch a person's heart, they will.

Some people are hard to take. Change could seem impossible in their life. But if there was anyone to have an influence and be a part of their change, it would be the person who steadfastly uses their God-given tools of influence—respect, kindness and prayer! It would serve the world well!

1 Peter 1:22 (NLT) "You were cleansed from your sins when you obeyed the truth, so now you must show sincere love to each other as brothers and sisters. Love each other deeply with all your heart."