Part One: “Why Is This Happening To Me God?”

I think one of the most difficult parts of my job as a Pastor, was watching someone go through a challenging season of their life. The enemy of this world, Satan, whom Jesus called "the thief who comes to kill, steal, and destroy," works overtime to bring hardship to life. We know that. We've all had our moments. My heart feels broken when I see people experience sickness or disease or calamity or lack that devastates their heart and life, and launches them into an emotional tailspin. These people often utter the words, Why me God? Why is this happening to me? 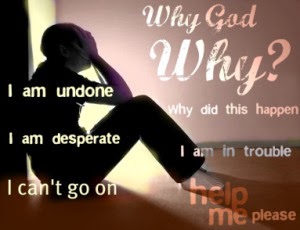 Most of the destruction and hurt that happens in our lives primarily happens for one of three reasons.

The first reason is because of poor choices made. God is always willing and wanting to speak to us, but in general, He speaks softly. When you are a seeker of God and are daily in His Word, it's much easier to catch when God is speaking to you. Too often we look like the little child with his eyes glued to the TV and seemingly deaf to the parent trying to get his attention. God speaks softly and expects us to seek Him. We all come to moments where we know God is trying to warn us to not do something, yet we too often override the warnings God brings to our heart. An acquaintance I've known for a few years recently died. He was far too young for his life to be over. He died suddenly of a massive heart attack. He was very much overweight and his wife said the doctor had been on him to lose the weight for a long time. He just kept putting it off even though his doctor and God had been dealing with him to lose the weight.

A number of years back, I counseled with a man who told me that he began flirting with a woman in his workplace. Initially he thought it was just harmless fun. He revealed that God was warning him to back off but he was confident he would not cross any lines. He was wrong. He soon became emotionally involved and it led to an affair. He ended up destroying his marriage and family. I had asked him to completely break it off prior to having the affair. Even if it meant changing jobs. He didn't listen to me and but more importantly, he didn't listen to God warning him. It was that warning from God that brought him into my office in the first place. After his life had crashed he told me he cried out asking the question Why me God? Why is this happening to me. I had to be honest with him and tell him that to put the responsibility of his life crashing on God, was to not take responsibility for his actions. It wasn't God’s doing.  God was trying to protect him from the hardship is was moving toward. It was about his own choices. Jeremiah 32:33 (NLT) says it like this, "My people have turned their backs on me and have refused to return. Even though I diligently taught them, they would not receive instruction or obey."

The second reason for the destruction and hurt that people experience is because they have a wrong perception of who God is. For example; this world is filled with people who think God is too busy to help them. They think He is a billion miles away and they are too insignificant for God to care about. These are both lies that have been perpetuated out of ignorance. God wants to hear your prayers! He cares about every detail of your life and wants you to have His wisdom to walk through life with His grace and favor. Philippians 4:6 (NIV) says, "Do not be anxious about anything, but in everything, by prayer and petition, with thanksgiving, present your requests to God." And God wants to be close and intimate with you! James 4:8 (NKJV) says, "Draw near to God and He will draw near to you..."

Believing wrongly about God because of ignorance of the depth of His love can lead you to be afraid of, or indifferent toward God. The love and help you could receive won't happen because of believing wrongly about Him! Hosea 4:6 (KJV) says, "My people are destroyed for lack of knowledge..." Because of ignorant and wrong perceptions of God, people ignore Him and never learn of Him or of His ways from His Word, the Bible. They figure out their own way of doing life that often conflicts and is contrary to God's ways. There own ways often lead them to destruction in their life. For example, many people think its okay to have sex outside of marriage. They may be ignorant of God’s ways but that won’t stop the fallout of unplanned children or sexually transmitted diseases such as Gonorrhea, Syphilis, Herpes, or others. Because they were ignorant of God's ways and boundaries, they opened themselves up to the afflicting diseases and in their low point, cried out to God, Why me God? Why is this happening to me? 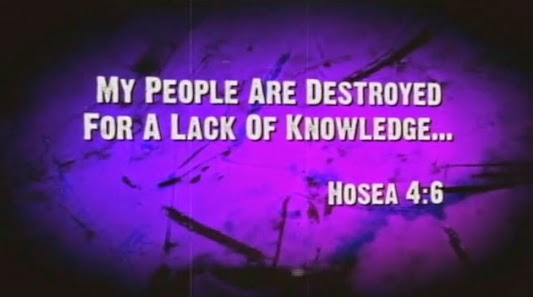 People that ignore God or don't take the time to learn His Word and ways, lose the benefit of His love, direction, instruction, and help in times of trouble. People that make their own path most often lead themselves into heart-wrenching trouble. Isaiah 53:6 NIV says, "We all, like sheep, have gone astray, each of us has turned to his own way..."

The third reason for much of the destruction and hurt that happens in people’s lives is because of ignorance of the enemy of their soul. They don't know or they don't believe in Satan. They do not know of his hatred and demonic assignment of destruction toward God’s creation. Some Christians think the devil only hates them but that's not true. The devil hates all of mankind and everything God has created! Mankind is God's creation and were created in His image and for that reason, Satan hates us. As I said earlier, Jesus told us that Satan "is the thief that has come to kill, steal, and destroy." Satan likes us to think he is just a storybook character or a holiday icon, but definitely not real. Most people actually do think he is make-believe. Satan loves that because then he pins the destruction that plagues mankind on God. And so the question comes to all affected in their darkest times saying, Why me God? Why is this happening to me?

Those are the three primary reasons leading to people asking Why me God? Why is this happening to me? More on these reasons next time...

1 Thessalonians 4:13 & 5:11 (NLT2) "And now, dear brothers and sisters, we want you to know what will happen to the believers... so you will not grieve like people who have no hope.... So encourage each other and build each other up, just as you are already doing."

Email ThisBlogThis!Share to TwitterShare to FacebookShare to Pinterest
Labels: knowing the devil's strategies, the promises of God, the weapons of our warfare, why bad things happen to good people, why me God? ignorance of God's will, wrong perception of God, your authority in Christ
Newer Posts Older Posts Home
Subscribe to: Posts (Atom)