Finding Strength in the Face of Adversity!

Life has its sudden disappointments, attacks, and hardships. As a Christian, you are in an earth that has been defiled by Satan. He has turned the earth into a spiritual battlefield. If you have not yet personally given your life to Jesus and made Him your Lord and Savior, you have unknowingly put your faith in Satan. You might be saying WHAT???  Why do you say that? I say that because God's word makes it clear, that either you serve Satan—even ignorantly and unknowingly, or you purposely live for Jesus, having put your faith in His saving grace. We see this truth in Colossians 1:12-13 (TLB). "and always thankful to the Father who has made us fit to share all the wonderful things that belong to those who live in the Kingdom of light. For He has rescued us out of the darkness and gloom of Satan’s kingdom and brought us into the Kingdom of his dear Son..." The Bible teaches us that there are two unseen spiritual kingdoms and you belong to one or the other. "...He has rescued us..."  That has happened if you've given your life to Jesus!

And so, we were talking of living in a world filled with hardship and we are because Satan and sin have tainted and defiled everything in this earth. Deep down as you look around, you know that to be true. Satan's entire effort is to keep people from learning of God and His ways, and from surrendering their life to Him. Satan will work toward that goal through any method possible—and all those methods are lies and deceit. Hell was created not for mankind but for Satan as a fallen angel. He knows he will one day be judged and locked up there and so its his plan to take by deception, as many people as he can with him. (Ever wonder where the old saying Misery loves company originated? It did with Satan. He accomplishes his efforts leading people away from the truth and God's plan of salvation through Jesus Christ. We see his deception from the beginning with Adam and Eve. It continues today and that is why he is called the god of this world. 2 Cor 4:4 reveals this truth saying, "In whom the god of this world hath blinded the minds of them which believe not, lest the light of the glorious gospel of Christ, who is the image of God, should shine unto them."

We live in this earth but it is a defiled earth that has been touched by Satan and sin. That's why there is so much pain and suffering and death and destruction here. That should be one more motivating reason why we don't want to sin. Sin is what defiles this earth and sin is what supports and strengthens Satan's rebellion and cause against God. We want to be force against sin and Satan, not aiding it's destruction.

Heaven is not a fantasy. It is a Christian's future home and a place that will be undefiled by sin and Satan's touch. Concerning those that have lived before us by faith in God, Hebrews 11:13-16 NKJV says, "...they were strangers and pilgrims on the earth. For those who say such things declare plainly that they seek a homeland.... But now they desire a better, that is, a heavenly country. Therefore God is not ashamed to be called their God, for He has prepared a city for them." This will be your future homeland—the homeland of all those who have received Jesus as their Lord and Savior!
If we live in this defiled earth, does that mean we are doomed to a gloomy life surrounded by Satan's touch and destruction? Absolutely not! Yes, the enemy of your soul does work to infect your life. He tries to make you sick, steal your livelihood and finances, break up relationships with those you love, and disrupt your life in a hundred ways. Because of this, we need God's direction and wisdom for every step. God is more than willing to help us. His Word sets up boundaries that are not meant to deprive us of good things, but instead to help us avoid minefields where we might step on a mine. His Holy Spirit comes to live within every believer and be that guiding force that helps us at every turn.

In 1 Samuel 30:3-3 we read about David and all his men coming back from a victorious series of battles with their enemies. As they were returning home after being gone for a long time, they saw smoke coming from the camp where their families lived. They soon found out that their enemies had burnt their camp to the ground, and took their belongings, wives and children! 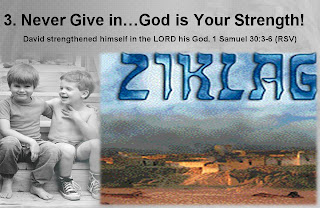 It says, "David and his men came to Ziklag, they found it destroyed by fire and their wives and sons and daughters taken captive. So David and his men wept aloud until they had no strength left to weep." David's men were so discouraged that they wanted to lash out and blame someone. They wanted to stone David as their leader. David's family was also taken and he was just as discouraged as they were, But instead of letting the discouragement overcome him so that he also was useless, we are told in verse 6, "David encouraged himself in the LORD His God." This wasn't David practicing some motivational technique. This was David’s developed faith and character. He had learned to praise and worship and sing to the Lord in all the trials of life. He wrote songs speaking of God’s promises of deliverance. He knew what God had promised him and had seen God work in his life over and over. He refused to listen to that lie of Satan that God had abandoned Him!

The devil would like you to think that God has abandoned you. He hasn't and never will! It’s not about Him abandoning you. It's about you abandoning your faith and trust in Him. David looked Goliath in the face. Moses looked at the Red Sea with Pharaoh’s army coming at him. Daniel looked at the lions. Shadrack, Meshach, and Abednego, looked at a fiery furnace. Paul a raging sea. They all trusted God and saw His deliverance and help. God alone is worthy of your full and complete trust!

Psalm 28:7 says, “The Lord is my strength, my shield from every danger. I trust in him with all my heart.” 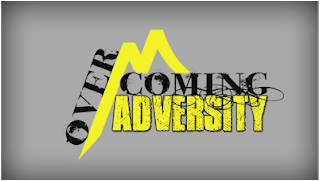 Let the Word of God speak PROMISE to you EVERY day. Read those promises. Proclaim them over your family and circumstances. Rebuke the devil and move forward. If you’re a husband, your wife and children want a dad that is a leader, not a quitter. If you be strong in the Lord and stay upbeat because you trust God in the face of adversity—and your heart, your face, your countenance, your words, and your actions show it, they'll be happy with you. They'll follow your lead no matter what the circumstance. Take authority over the thief in your life. Rebuke him in Jesus name! Put your hand to the plow and work hard asking Him for guidance every step of the way. Do your part and trust God to do His! Praise God together and believe He will turn things around. Honor Him with sincere heart-felt faith! 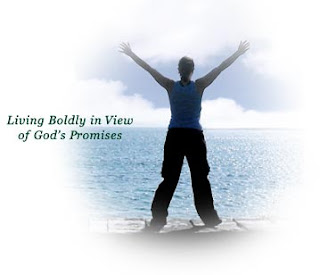 If you've been overcome by despair, remember who you are in Christ. Spend time with God and then take the joy and promise of His Word to your family. Stir all their faith and believe God together. God restored all of David and his men's wives, families, possessions and much more. He'll do the same for you if you'll act like David did and let God arise in your heart!