Why Did God Give You Power and Authority?

How about we start off this morning with a knockout punch promise and verse from Jesus? Are you ready? Then read. John 14:14 NIV. "You may ask me for anything in my name, and I will do it."

That sounds like Jesus is making Himself a genie—a wish granter—the divine wishbone. He isn't. He’s the executor and fulfiller of God’s will and purpose. When He spoke these words, He was preparing His disciples to continue on with His work in His name. He wanted them to know that He would not abandon them or leave them alone. He didn't want them to feel inadequate, after all, He was the Son of God and they weren't! He declared these words to let them know He would be with them and would always help them. Their obedience to step out in faith and minister to those around them for His glory, would not be about them. It would be about bringing the good news of Jesus Christ and His power to the world so that they would know beyond the shadow of a doubt, that they were sent by Jesus. He wants the same for us!

When Jesus ministered, He ministered with power. Luke 4:32 KJV says, "And they were astonished at Jesus’ doctrine: for His word was with power." The word power here is often translated authority. But it really implies both as we see in Luke 4:36 NKJV. "Then they were all amazed and spoke among themselves, saying, "What a word this is! For with authority and power He commands the unclean spirits, and they come out." The Greek word for authority is the same word as power in the first verse. And the word for power in this verse means “miracle-working power.” The bottom line is this; when Jesus ministered, He was doing what His Heavenly Father wanted Him to do with authority and miracle-working power!

Now in teaching His disciples, He was preparing and instructing them in how they will continue His work with authority and power. In that time of instruction, He says some mind-blowing and powerful words. Pay close attention because He is speaking to His disciples then, but also to all those who would represent Him in the future—that's you and I. He says: "Most assuredly, I say to you, he who believes in Me, the works that I do he will do also; and greater works than these he will do, because I go to My Father. And whatever you ask in My name, that I will do, that the Father may be glorified in the Son. If you ask anything in My name, I will do it. (John 14:12-14)

You want to know why there seems to be such a drought of these kinds of miracles and power today? Because believers are not taught their purpose, power and authority! For most people, these words are difficult to take at face value. People want to reinterpret them with symbolic meaning instead.  The words as they are, throws their mind in tilt. That shouldn't be the case. Jesus was preparing them as they continued His work—reaching out to people and ministering to them and their needs in His behalf. And so He spoke the words... “If you ask anything in My name, I will do it.”

For most believers, it only takes trying to step out at being used of God one time with less than satisfying results to discourage them from ever doing it again. I was praying for my friend’s son to get better and I asked Jesus to heal him and it didn’t happen, so this could not apply to me.

That wouldn't be faith. That would be an experiment. Jesus didn't tell us to experiment. He commissioned us to reach and touch the world with His love and power. We aren't responsible for the results. When we first begin to walk out this calling, there may be no real faith involved because we're too busy trying to overcome the fear of stepping out in faith. Over time that subsides. Your actions and heart will mature with sincere heart-faith. In time, you will see God's power work through you! We are responsible to learn and know the Father’s will, taught to us through the Word of God. And we are responsible to follow the leading of the Holy Spirit and learn to respond in faith as He directs us. We are to leave the rest up to Him. As we well know. We aren't God. He is. 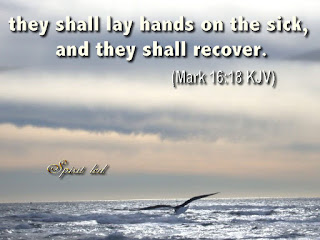 Remember that Jesus walked in authority and power. He knew the Father’s will. He knew when the Father was leading Him. He never doubted. He was the son of God and yet people's unbelief hindered healing from Him as seen in Mark 6:5-6 (NKJV). "Now He could do no mighty work there, except that He laid His hands on a few sick people and healed them. And He marveled because of their unbelief..." What you never see in the gospels is His years of learning to obey His Father up to the time of the start of His ministry. You and I are learning the word of God. You and I are learning to follow after the Spirit of God. Romans 8:14 says, “For as many as are led by the Spirit of God, these are sons of God.” Learning to do anything—especially learning God’s will is a process. It happens through prayer. It takes courage and spiritual strength.

Over my 36 years of ministry, I have learned to keep my head and mental arguments of doubt and unbelief out of what I feel the Spirit of God is leading me to do—especially when it comes to praying for people. As a man, I’d like to try to fix everyone’s problems, yet what I can do is so minuscule and shallow. What God can do is beyond what I can ask or think including making the impossible possible. So, I try to mentally step aside and just pray and believe with them in faith according to God’s will. The testimonies that come back are amazing. He gave us these words to help others in His authority and power! So be led by the Holy Spirit and when the time comes, just do it!

Luke 10:19 Jesus said, "Behold I have given you authority over all the power of the enemy..."

Email ThisBlogThis!Share to TwitterShare to FacebookShare to Pinterest
Labels: being led by the Holy Spirit, God's will, healing, Holy Spirit, Jesus, miracles, Power and Authority, praying for the sick, the name of Jesus
Newer Posts Older Posts Home
Subscribe to: Posts (Atom)