Part Three - Getting God's Plan to Succeed: Partnership and Accountability

If you have not read the previous two parts on Getting God's Plan to Succeed, you can read them by clicking here: Part One, and Part Two

Every person has desires in their heart. These desires usually have something to do with improving who you are as a person. They may pertain to your discipline, temperament, physical condition, mental state of being, or goals and achievements just to suggest a few. Because we have these inward desires, we take an occasional stab at achieving them, and more often than not fail. We don't just fail. We fail again and again. There are literally millions (if not billions) of people who have tried to stop a bad habit or behavior, or have tried to develop or pursue a good behavior or desired goal in their life. And the result has been repeated failure. As I said yesterday, God did not create us to fail. He created us to succeed by following His lead in life. 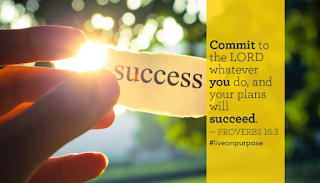 Today I want to talk more about how to follow God's plan of achieving ongoing success, by talking about planning for partnership and accountability in the laying out of your plan, prior to your attempt to execute it.

When we look to role models to be inspired, we sometimes see great achievers who reach their goals with other people by their side. They are often part of a team such as in sports or group, etc. But then you sometimes see people who appear to be a solo achiever such as a professional golfer or a solo singer, etc. What I want you to understand is that absolutely no one achieves great goals alone. Everyone has had mentors, helpers, and partners on the path to their success. And most importantly, let's not forget God as the main partner of their success.

When I made the decision to run my first marathon, the first thing I did was grab two to three forms of support beyond praying and asking God to help and lead me. I began to read good books on running marathons. I found a running partner to run with three days a week. And I became a part of a group of 5 guys who were all training to run their first marathon, running a weekly run together. I can assure you I would not have made it if it hadn't been for these people in my life. 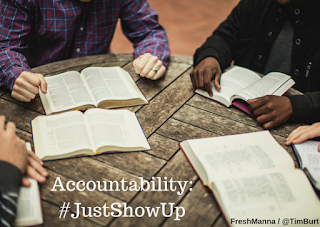 You might think of accountability as reporting in to someone and showing them everything you've done. The first part of accountability is just showing up. You'd be amazed at how many goals you'd achieve if you'd just show up for the process. When there is no accountability, no showing up, and no sharing with a friend and partner, the difficulty in pursuing the same goals, then you just quit and you're never challenged or encouraged by someone who has the same desire and interest as you. That is what most people do. They take on their desires solo, and quit when it gets tough. (And that usually happens in the first day.)

One of my closest friends Ray, was invited to run the same marathon I was. We had run together many times in the past, although not this level of long-distance running.  We both accepted the challenge because we both felt God wanted us to. And so we partnered up together to run. We'd run three times a week, very early in the morning. There were mornings I'd wake up so tired, I did not want to get out of bed. He had the same experience. Because I knew he was going to be there, I forced myself to get up and show up. And he did the same. He had his days where he would have rather stayed in bed but, because of the mutual accountability, we just showed and developed our routine. And we both showed up at 5:00 a.m. on our weekly long run with our running group. And in that group, we stretched our mileage longer every other run. There were so many times my mind would scream, I can't do this! But because of the presence and encouragement of the guys in the group, I pressed through.

This is what accountability and partnership does. It creates conversations, transparency regarding self-doubt, empathy, prayer, and encouragement. As I said, many people never tell anyone they are starting a challenge because they don't really think they are going to make it, and don't want anyone to know in order to protect themselves from embarrassment when they quit. That is the definition of #failure!

Jesus sent his disciples out in two's. When Jesus would go to minister, there were certain places He could do no miracles because there was no faith. Only unbelief. He knew this spirit of unbelief and doubt could jump on his disciples. And so He sent them out to preach, heal, and cast out devils in His name in two's so they could encourage each other as they took on this huge role for the Lord.  We see this in Mark 6:5-7 (NKJV) "Now Jesus could do no mighty work there, except that He laid His hands on a few sick people and healed them. And He marveled because of their unbelief. Then He went about the villages in a circuit, teaching. And He called the twelve to Himself, and began to send them out two by two, and gave them power over unclean spirits." 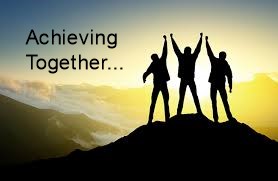 After that, Jesus sent even more out in His name and again He sent them out in two's as we see in Luke 10:1 (NKJV).  "After these things the Lord appointed seventy others also, and sent them two by two before His face into every city and place where He Himself was about to go."

First and foremost, these were individuals. Each one of them had a desire and a goal that God had placed in their heart. They wanted to be used of the Lord. But they were also a part of a larger group mentored by the Lord. And then the Lord sent them out in two's to get the job done. This is a wonderful pattern contributing to success for us to learn from.  Partnership and group participation expands our knowledge and understanding, our perspective, our vision, and our efforts to success. It brings empathy and encouragement in the face of unbelief in yourself or your goals at times of obstacles and difficulty. It also brings a strength from the Lord and others you partner with that helps you pursue and succeed in your goals!

Part Four of Getting God's plan to Succeed coming Monday...

2 Corinthians 8:23 (TLB) "If anyone asks who Titus is, say that he is my partner, my helper in helping you, and you can also say that the other two brothers represent the assemblies here and are splendid examples of those who belong to the Lord."