Something Very Special for You! A Note From Pastor Tim

I want to share some news with you. For some time now Renee and I have had the honor of previewing Christian movies prior to their release.  As a matter of fact, we just previewed the movie "I Can Only Imagine" coming out March 16th of 2018.  Renee and I were blown away at the quality, the story, the excellence of this production and you will love it when you get to see it. If you'd like to see the trailer, you can view it here: "I Can Only Imagine."

But, there's more!  Arguably the best documentary of 2017 "Christ Revealed" begins starting TONIGHT! - Tuesday November 7th, and you can watch it FOR FREE for a limited time!
Because He is risen, we can rise above. If you are feeling lost, abandoned or forgotten. The time is now to turn to Christ. Christ Revealed will arm you with the history and undisputable evidence of Christianity to strengthen your faith and walk with Jesus.

You'll watch  The History -- The Evidence -- The Inspiration   of "Christ Revealed"

God bless you and thank for your time!
Pastor Tim Burt
https://todaysfreshmanna.wordpress.com/
Posted by Fresh Manna by Pastor Tim Burt at Monday, November 06, 2017

Changed From Wimpy to Mighty For God

Do you ever find yourself caving in to things you shouldn't? Doing things you don't want to do? Not doing things you know you should? You have good intentions that seem to last for a minute and then you just cave? And then you have the thought, I am such a wimp! I have no inner strength to do anything I know I should.

The Bible says, "As a man thinks, so is he!" And of course that is truth! And because it is, it matters what you think about yourself. If you put yourself down, the devil will surely accommodate that and remind you of why you're worthless and a failure before God. You may find yourself with little will-power or inner-strength and actually see proof of it in your life, but that doesn't mean it's the truth.

I remember hearing a story years ago that I think Zig Ziglar told about an elephant. It went like this:

As my friend was passing the elephants, he suddenly stopped, confused by the fact that these huge creatures were being held by only a small rope tied to their front leg. No chains, no cages. It was obvious that the elephants could, at anytime, break away from the ropes they were tied to but for some reason, they did not. My friend saw a trainer nearby and asked why these beautiful, magnificent animals just stood there and made no attempt to get away. “Well,” he said, “when they are very young and much smaller we use the same size of rope to tie them and, at that age, it’s enough to hold them. As they grow up, they are conditioned to believe they cannot break away. They believe the rope can still hold them, so they never try to break free.” My friend was amazed. These animals could at any time break free from their bonds but because they believed they couldn’t, they were stuck right where they were.

I love this story because it reminds me that in our life prior to Jesus, we were conditioned to believe many horrible things about ourself with nothing real to refute it. But then we gave our life to Jesus and the Bible began to teach us things that were critical to knowing who God created us to be. Some people never learn them. For them, this verse describes their life. Hosea 4:6 (NKJV) "My people are destroyed for lack of knowledge..."

Jesus died for our sins, washed them away, and filled us with His Holy Spirit so that we could begin to see life and God's will through His eyes. One of the things God wanted us to  see and know was that we were no longer wimpy! His word tells us that it the same Spirit (Holy Spirit) that raised Christ from the dead lives in us and strengthens us. Romans 8:11 (NLT) "The Spirit of God, who raised Jesus from the dead, lives in you. And just as God raised Christ Jesus from the dead, he will give life to your mortal bodies by this same Spirit living within you." 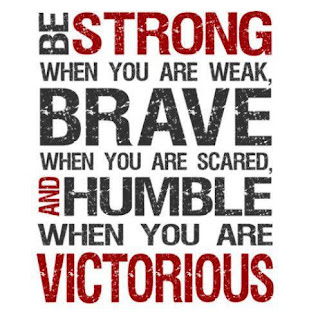 We see this play out in the story of Gideon. He and his people were surrounded constantly by enemies oppressing them. Gideon believed in a lie that had rooted in him over time. He believed he was a loser. He believed his people were losers. He was a man who lived day-by-day in fear.  That rendered him helpless and put him in survival mode. He never tried to change anything. He only tried to exist and survive. One day Gideon was working in his wine-press—his hideout, when suddenly the Lord appeared to Gideon saying, “With the strength that you have, go and rescue Israel from the Midianites.” (Judges 6:14)

Gideon couldn't believe that he was hearing this. He felt that his life represented being a fearful wimp! He felt like a loser and he let the Lord know it saying, "But Lord, how can I rescue Israel? My clan is the weakest in the whole tribe of Manasseh, and I am the least in my entire family!" (Judges 6:15) Gideon was basically telling the Lord that he came from a tribe of losers and a family of losers and he was the biggest loser. That was how he saw himself. Worse than that, he believed and had faith in it. But this is an example of how God's Word breaks the back of deception. Gideon began to believe what the Lord had said. The Lord was helping him discern that this was the truth. God called him “a mighty man of valor.” Then God told him, "I will be with you. And you will destroy the Midianites as if you were fighting against one man." (Judges 6:16)

When God begins to help us understand who He created us to be, it can take time to believe it. It took a while for this to sink in for Gideon but God was gracious in helping Him believe it. Once Gideon did, he was no longer the same person. He resisted allowing himself to think he was the fearful loser. He kept in mind, what God said he was—a mighty man of valor. Gideon, with the help of the Lord, defeated the Midianites and became one of the great warriors and Judges of Israel.

You may hold a high opinion of yourself out of pride and conceit. That is a wrong perception and is not the truth. One day that pride will be broken. Or, you may be one that has little self-esteem and sees yourself as a loser. This is also a wrong perception. Our life will either be a life built on ignorance and false perceptions, or we will let God reveal who we were created to be through Christ Jesus. Once Gideon believed what God said about him, all lies and superstitions in his life were eliminated. He became the new man who God created him to be—a mighty man of valor.

No matter you feel, cast aside all negative feelings and instead thank God for His promise in, Psalms 118:24 (NKJV)"This is the day the Lord has made; We will rejoice and be glad in it." And, "I can do all things through Christ who strengthens me." Philippians 4:13 (NKJV)

We can wake up every day thinking and saying to the Lord, “Like Gideon, I am mighty in you. I have the Holy Spirit who raised you from the dead, living within me! I am here to be strong and shine for you. I can find strength to do what you ask me to do. I am here to be excellent in all I do, leaning on you Lord for Your help in everything. I will have a great day. I will Lord because I can do everything with the help of Christ who gives me the strength I need!"  This is your truth to be let formed in you to live by!

2 Corinthians 5:17 (NLT) "This means that anyone who belongs to Christ has become a new person. The old life is gone; a new life has begun!"