Hold on Christians! Your walk as Christians is going to get more difficult—even persecuted in ways you've never before experienced. Television and media has branded homosexuality, now leading to transgender confusion, as the absolute new norm and if you get in the way of it, you will be branded too!

Recently, a man struck a conversation with me after seeing a book I was reading. He told me how distraught he and his college age daughter were at being attacked and called a bigot and hater just because they felt homosexuality was wrong. They wanted to know what I thought about homosexuality.

I will share a condensed version with you of what I shared with him. Homosexuality is sin. So is gluttony, fornication, lying, stealing, adultery, lust, and on and on. The Bible says so! People can belittle and berate the Bible, but those that do, do so ignorantly. It is the most read book in History. It is historically accurate over the ages. It is declared as the "inspired word of God," and the word of God by Jesus. Jesus is either the greatest hoax, liar, deceiver, and fraud ever injected into society, or He is exactly who He said He was, the Son of God sent to be the Savior of the world. Even secular historians like Josephus recorded Jesus, His life, and miracles. Jesus is who He said He is. He came to save you and I from our sins by taking the punishment we deserve for them, upon Himself – this as an act of love and offer of reconciliation through our faith in Him as our personal Savior.

Jesus continually referred to the scriptures as sacred. They were His constant and only reference for all of God’s ways. To those that didn’t understand them, He said, “Your mistake is that you don’t know the Scriptures, and you don’t know the power of God. (Matthew 22:29 (NLT)) Jesus said, “Heaven and earth will pass away, but my words (scripture) will never pass away.“ (Matthew 24:35 (NIV) All truth is established from God's Word—like it or not! 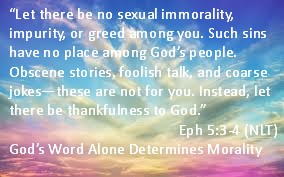 When we become a Christian, having received Jesus as our Lord and Savior, the Holy Spirit immediately takes residence within us. He helps us see life and God's Word through His eyes and brings revelation and insight to the scriptures. That is why non-believers cannot understand the scriptures. They do not have the Holy Spirit. As Christians, we have been forgiven of our sins. In our new life in Christ, God wants us to learn what sin is and restrain ourselves from them. The Christian life is a life of restraint. The purpose for that restraint is to protect us from the consequences of sin and to follow God's ways that lead to great blessing. Every good parent understands this because they restrain their children's wrong behavior and reward their good behavior. The world hates hypocrites and calls the Christian who sins, that very name. Christians don't have a pass on living right. It's a choice they have to make moment-by-moment, and it is the learning curve every Christian gets wrong a thousand times as they grow and mature in Christ. The world holds itself to no accountability while holding Christians to an accountability of perfection—or be labeled hypocrite. And so, it is important for Christians to learn to be transformed in how they think, speak and act, by the scriptures, as they "put on Christ" for the world to see. And finally, Christians are to mature and become godly influences in this world—becoming those who reach out to others with the love of Christ. The restraint of sin and evil is what leads to a more beautiful and peaceful world.

I explained to this man that homosexuality is wrong and sin. It doesn’t make any difference what the rhetoric is. People will always try to justify or create excuse for what they want to do to fulfill the lusts of their flesh. That or manipulate the meaning of scripture to make it acceptable. They can do that but they will live in their own self-deception. God does not excuse it.

Romans 1:25-28 (NIV) says, “They exchanged the truth of God for a lie, and worshiped and served created things rather than the Creator--who is forever praised. Amen. Because of this, God gave them over to shameful lusts. Even their women exchanged natural relations for unnatural ones. In the same way the men also abandoned natural relations with women and were inflamed with lust for one another. Men committed indecent acts with other men, and received in themselves the due penalty for their perversion. Furthermore, since they did not think it worthwhile to retain the knowledge of God, he gave them over to a depraved mind, to do what ought not to be done.”

The homosexual says, "I was created this way” but the truth is, with the exception of someone born with a physical genetic defect, there is no agreed upon scientific proof to this by science and researches overall! None! They may have desired a wrong fleshly desire, but that is why God wants us to learn restraint! The homosexual says “I was born this way.” Men and women may be born with a more masculine or feminine bent as perceived and accepted by society from sports to arts, but that does not make one a homosexual. 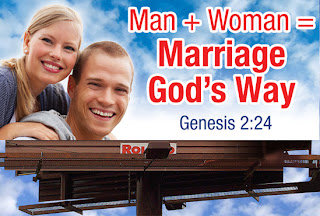 I am not a hater of anyone. I am not a homophobic. I am not a bigot. I have had a number of homosexual friends whom I treat with great respect, love, and kindness, yet we agree to disagree. They will have to decide their spiritual destiny. Marriage from the beginning was God’s plan for a man and a woman. It is more than a legal union. It is a spiritual union blessed of God that began with Adam and Eve—his wife from the beginning of time. “For this reason a man will leave his father and mother and be united to his wife.” Marriage belongs between one man and one woman only! (Mark 10:7 (NIV)

God created the male and female version of man and animals to be “fruitful and multiply.” Homosexuals cannot naturally procreate and were not created to do so. For anyone to ignore this basic obvious truth in order to make someone feel more accepted is to make sin feel more acceptable. This doesn’t help you, them, or society. Yet to treat a homosexual with name calling or disrespect is also wrong. We are to treat every person with kindness, respect, and the love of God.

The religious homosexual community twists the meaning of scriptures, does away with scripture, or make their own version of God to their liking—a true form of idolatry. As Christians, if we don’t fight for a more moral society based on scripture, with love and redemption from sin as it’s goal, we will end up with a godless, immoral society that yes, will end up like a Sodom and Gomorrah that will eventually end up falling to the judgment of God.

Our voice and opinion has the right of influence just as they desire theirs to. The homosexual communities’name calling of Christians who do not agree with homosexuality as haters and bigots, is really who they are if they say it. Christians that do act like haters and bigots are not Christians at all! People disagree about many things and fight for legislation based on their beliefs.  Christians simply need to take the time to continue to let their core beliefs be formed on God's Word, not on feelings of pressure and intimidation, or a wrong perception of what love is. God knows what love is and tells us all that a part of love is to hate sin and to restrain from sinful activity, no matter what it is. Parents teach their children to restrain their wrong activities every day. 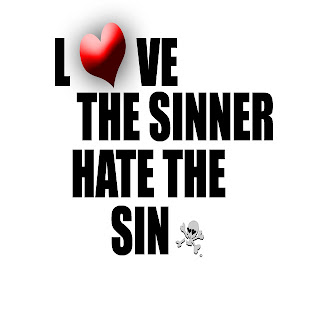 We are all imperfect and miss it and need to repent and get it right. God’s grace and mercy is great and reaches out to us all as we work to conform to God’s ways. He is there to help us, not condemn or beat us up. But, the Lord does want us to change! Restraint is a part of the Christian life! Romans 6:12 (NLT) "Do not let sin control the way you live; do not give in to sinful desires" As a Christian, we are to hate sin and evil. Psalms 97:10 (NIV)” Let those who love the LORD hate evil, for He guards the lives of his faithful ones and delivers them from the hand of the wicked.”

Hating sin is not hating the sinner. Like Jesus, we reach out in love with the redemptive good news of Jesus' love—the daily message of Christ, but hate sin—first in our own life and then in overall in society. Use your influence to prevent it as this is what God would have you do!

For more reading on this subject click here: Marriage and the Family