Two Godly Cures for Our Societies Woes: Part One


America is in crisis over many things at this moment. I'll mention two of those that stand out today. First and foremost, Christians are suffering from Bible illiteracy and intimacy with God more than anytime I've ever seen. Because of technology, most Bible believing churches flash the scriptures preached, on the screen. This has resulted in many Christians not bringing their Bible to church because they don't feel the need to bring them. They hear scriptures but don't remember them and don't study them out later on. Christians today are often walking around thinking they know their Bible, but when challenged or needing to talk about scripture with Bible opposers, they find themselves inept in doing so. And, they don't have enough scripture in their heart to be a restraining force against the many temptations that face them today! Pastors better figure this out soon and create some solutions because, although they preach to their congregation to read their Bible daily, data shows that most don't. When Christians don't know their Bible, they don't reverence God's word and live by it.  This has resulted in many Christians living as worldly as people in the world. It is a crisis!

Secondly, Christians do not show proper reverence to God and His Word. They lack respect for God and His word and consequently, lack respect for their fellow-man and how they deal with him. Reverencing and respecting God means respecting your fellow-man! I believe that most every Christian would agree that the giving of and showing of respect, to their spouse, children, friends, boss, and co-workers, as well as to those in authority is taught by God's word as critical to the human and Christian experience. As Christians we should give and show respect without prejudice. Even when evil hate groups come into play, there is a way to lawfully and respectfully oppose them and even change laws to restrain them. When those in authority are bombarded with hundreds of phone calls, it's amazing what happens! People are to receive and give respect to one another even when they disagree with their opinion, choices, or lifestyles. No one respects an outright evil person. But, putting that aside, people do not have to agree or condone wrong or evil behaviors of people, but they should show respect to every human being as someone created by God. When hatred is boiling, the truth that "God wants all men to be saved and come to the knowledge of the truth," vanishes! In heightened and emotional moments, you'll notice that if the core value of giving respect isn't developed within you, then at the time when things go wrong, your lack of respect will lead you to say and do all the wrong things. Love and respect must become pillars for our society in order that we become a respectful and respected nation walking in as much unity as possible.

1 Thessalonians 5:12 (NIV) says, “Now we ask you, brothers, to respect those who work hard among you, who are over you in the Lord and who admonish you.” The word “respect” in this verse means to know or have a right perception of another.  Going deeper it means to come to know and understand someone so that you don’t prejudge or mischaracterize who people are and why they do what they do. It implies getting to know and understand the good in those around you. In this verse it especially implies getting to know what those in spiritual authority over you do, while appreciating the hard work and pressure it takes to walk as a leader.  The verse continues; 1 Thessalonians 5:13 (NIV) "Hold them in the highest regard in love because of their work. Live in peace with each other." 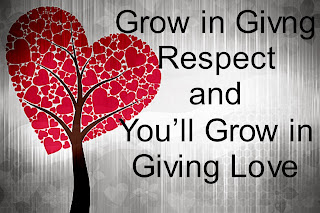 Everywhere I go I treat people who serve me with great respect whether they be the server in a restaurant, a receptionist, a cashier—whoever serves me.  I especially do that with my wife and children.  It is always appropriate do give kind respect. When I don't like laws, I call and write and communicate with those in authority respectfully. This has nothing to do with what I think they deserve or how they are presently acting. It is simply the right thing to do and what God wants me to do. And don't miss this: When respect is given and executed consistently, it will influence those that serve and help you in your life. You will help them and overall, you will see that it will come back to bless you! 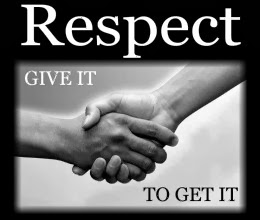 Too often we think we should give honor and respect only when we feel that someone deserves it. God gave you love, which encompasses much more than respect, when you were a sinner and did not deserve it. That is what Jesus modeled. That is what love does. Giving love only when someone deserves it is shallow and would be dependent in our knowing someone well enough to make judgments about what they deserve.  Respect comes first. We give kind respect to all. When we do, consistently and always, to all, then we will see God’s power operating through it and coming back to us in our lives.

Our society is in crisis! An intimate relationship with God and His word, and showing sincere respect for one another will go along way in bring healing and blessing to you and to all!

Romans 12:10 (NLT) "Love each other with genuine affection, and take delight in honoring (respecting) each other."