Will My Children Walk With God? Part One

I've often been asked for prayer by parents who are very concerned and distraught over their adult children. They did their best to raise their children to know and love the Lord, but now struggle as they watch them seemingly go astray from the life of Christ they were raised in. Why would that be? Doesn't the word of God promise us, "Train a child in the way he should go, and when he is old he will not turn from it?" Proverbs 22:6 (NIV) 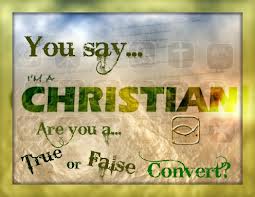 The answer is yes! That is a promise of God and one that our faith must remain anchored in despite what we see our children doing!

As children become young adults and enter into the world without you by their side, they find themselves amongst the non-religious, atheists, and lovers of false gods. Each of those them have their own personal view of God and often challenge the belief system of Christians. The debates go back and forth and most young adults have not prepared themselves with the sound biblical answers to support the kinds of questions that come at them. They too often end up feeling foolish and realize, they don’t even really know what they believe, or why. They have grown up in your faith but haven't really grown in their own personal belief system.

Every individual needs to experience the Lord for his or herself—including your children. You may be like Renee and I. We know our children had real experiences in the Lord growing up. We began training them as toddlers. As teenagers, during our family devotional time, they would often share their hearts on scriptures that they had read. They'd share powerful insights that ministered to our hearts. There was no question as to whether they were hearing from God. Renee and I would often rejoice in prayer, thanking God for the things He was teaching them.

As each of our children became young adults, they had to come to grips with owning their own faith. They were no longer under our direct parental authority. They would now make their own life decisions and decide for themselves what they believed. They were challenged in college and in the workplace by peers who had little or no faith. They would have to learn to answer their own questions and live for the Lord from their own volition, not from pressure from Renee and I. I particularly remember my son-in-law and questions he would get from a college professor, and my youngest son being challenged by secular college peers. They would ask to sit down with me and go through the scriptures to learn how to answer questions. What a great experience and growth period that was for all of us! It reminded me of the verse Proverbs 27:17 (NKJV) "As iron sharpens iron, So a man sharpens the countenance of his friend."

When children follow God because they are afraid of you or don't want to disappoint you, they end up with religion. What do I mean they ‘end up with religion'?  When children are pressured to have a religious life because you want them to, they end up going through motions just to please you and others. They don’t do so out of a love for God or out of a personal relationship with Jesus. They end up being religious—that is, going through religious motions while living a worldly lifestyle—two things that should be contradictory! The world is full of religion and that is why the non-religious world thinks the religious world is so hypocritical.  They see religious people professing to love God, yet their lifestyle contradicts that truth as they live as worldly as anyone without God. We don’t want that to happen to our children. We want them to know and love God because they believe and embrace Jesus as their personal Lord and Savior, and the Word of God as their own living truth to guide their life choices. 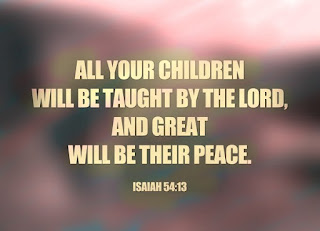 "All my children shall be taught by you LORD, And great shall be their peace." Isaiah 54:13 (NKJV) Have faith in God's love working in their lives! Always!

Email ThisBlogThis!Share to TwitterShare to FacebookShare to Pinterest
Labels: backsliding children, helping your children grow up Christian, Jesus, love, prayer, the Word of God, training your children in the Lord, Will My Children Walk With God
Newer Posts Older Posts Home
Subscribe to: Posts (Atom)