The Most Important Thing To Know In a World Full of Rebellion!

If you feel like there is demonic activity coming against your life, make sure this isn't why!

If there were ever attitudes that you would want to embrace, that would transform and help develop a part of your character, it would be these: learning to develop an attitude of sincere respect for people, and learning to honor authority. 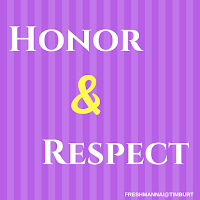 Learning to show each and every individual respect is understanding that each and every person was created by God. They may not be who you like. They may on the surface level be flawed in their thinking and actions—maybe in your view, beyond words. Regardless, they are God's creation whom Jesus went to the cross and died for. This is the basis of respect to hold to when there doesn't appear to be any other reason for respecting them. Going deeper, it's critical that we all touch this truth of our own life—that we are flawed and but by the grace of God, we'd also be doomed to destruction and Hell. Coming from that place daily, can exalt your thankfulness to God each morning, and set the table of your heart to walk in the attitude of respect toward each individual.

I know it might take ten seconds for someone to say or do something that causes you to cringe and feel disrespect. I get that. We all experience that! But, showing respect will continually remind you that you are a light for Jesus, and an influence to them, whether they receive it or not. When you sincerely look for the good in them, you're prepared with a platform to bring words of grace into their life if that opportunity arises. Never forget this truth! No matter how broken and hardened someone is, the DNA of searching for God and knowing Him is within their being!

Secondly, for those in authority, it doesn’t stop at respect. We are called to esteem the office (the position of authority) people hold. That doesn't mean esteeming them but the office they stand in. We are instructed by God to show them the honor bestowed by the position of authority to the degree the office holds. Whether they are a soldier, or a school teacher, a police officer, or a Mayor—any office of authority is to receive respect and honor. Giving that respect means believing the best, giving the benefit of the doubt, and trusting they know more about their position than you do since it's their world. If you were in one of those positions, you would desire it and appreciate it.  Every parent would like the respect (and once in a while) the honor of being a parent. In the work place, as a boss, you would appreciate that respect and honor. Most people know how to do that and will do so to some degree if they feel the person is in a high enough office. But showing respect and honoring authority goes beyond the President of the company you work for or the Police Chief or the Governor of your state. 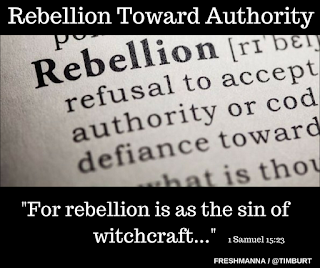 This country and many countries around the world are presently in a state of rebellion—the disrespecting and dishonoring of authority. You probably have no idea what those words spiritually mean or how bad that is. The Bible compares rebellion to witchcraft and an operating base for demonic activity.1 Samuel 15:23 says, "For rebellion is as the sin of witchcraft..."  Disrespect and dishonoring is rebellion! By carrying those attitudes, you are opening the door to the devil and demonic activity in your life.  The pattern of disrespect and dishonor and rebellion in this nation is opening this nation to great degree of demonic activity which it will greatly regret. If this has been a part of your life, you need to repent to the Lord and stop it immediately! It is a playing with something worse than fire!

The following scriptures may bring questions to you, but pray and ask God to help you grasp them. The fact is, initially you have to trust God. He knows the big picture. As you do and obey Him, He sheds light on scriptures and helps you understand the truth of them and how they work. If you don't, you'll stay in rebellion and the fruit of it will manifest in your life guaranteed!

Romans 13:1-7 (NIV) " Everyone must submit himself to the governing authorities, for there is no authority except that which God has established. The authorities that exist have been established by God.  Consequently, he who rebels against the authority is rebelling against what God has instituted, and those who do so will bring judgment on themselves.  For rulers hold no terror for those who do right, but for those who do wrong. Do you want to be free from fear of the one in authority? Then do what is right and he will commend you. 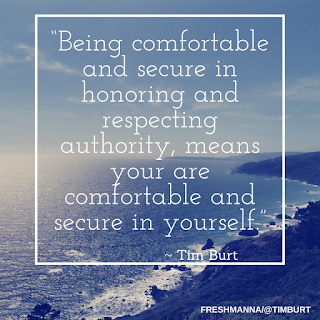 For he is God's servant to do you good. But if you do wrong, be afraid, for he does not bear the sword for nothing. He is God's servant, an agent of wrath to bring punishment on the wrongdoer.  Therefore, it is necessary to submit to the authorities, not only because of possible punishment but also because of conscience.  This is also why you pay taxes, for the authorities are God's servants, who give their full time to governing.  Give everyone what you owe him: If you owe taxes, pay taxes; if revenue, then revenue; if respect, then respect; if honor, then honor."

Phil 2:3-5 gives us instruction that makes respect for all possible. “Do nothing out of selfish ambition or vain conceit, but in humility consider others better than yourselves. Each of you should look not only to your own interests, but also to the interests of others. Your attitude should be the same as that of Christ Jesus…”

Learning to show respect and honor authority will change you. It will develop godly character within you and lead you to walk in greater love and warmth shining brighter as a Christian in a dark and cold world. And it will protect you from the demonic attacks that come with rebellion!