The Mindset of Victory and Success

We live in a world of people carrying entitlement attitudes—an attitude of the world owes me and needs to make my life work. People with this type of attitude blame the woes of their life on everyone and everything including God, while excluding personal responsibility for their own life choices. They believe that because of life's injustices, the world owes them and they are entitled to have others provide and help them get though life.  Make no mistake about it. This mindset will lead to a life of discontentment, anger, and heartache. 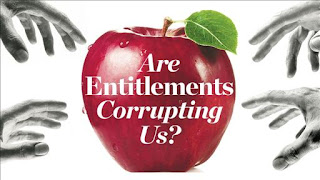 There is a healthy entitlement that the world knows nothing about. It is the entitlement that comes from a relationship with God through Jesus Christ. It is having a healthy, reverential, and prayerful, faith-filled dependence upon the Lord. Every Christian is entitled to that! If someone tells me that I use God as a crutch, I agree with them and say, If God is my crutch, Praise God, I need one under each arm.

There was once a King named Asa. He loved God and commanded God’s people to follow God’s ways. During his reign there was a time when he was attacked by an army that dwarfed the size of his. King Asa knew and understood he was entitled to God’s help and prayed in sincere trust and faith to God. 2 Chronicles 14:11 NLT says, “Then Asa cried out to the Lord his God, "O Lord, no one but you can help the powerless against the mighty! Help us, O Lord our God, for we trust in you alone. It is in your name that we have come against this vast horde. O Lord, you are our God; do not let mere men prevail against you!" The next verse gives the result of that prayer—verse 12: “So the Lord defeated the Ethiopians in the presence of Asa and the army of Judah, and the enemy fled.” 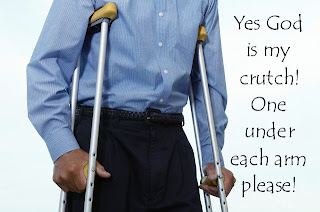 King Asa’s army didn’t stand around and do nothing. 2 Chronicles 14:12-13 tells us they fought and fought hard.  “The Lord defeated the Ethiopians in the presence of Asa... Asa and his army pursued them as far as Gerar. Such a great number of Cushites fell that they could not recover; they were crushed before the LORD and his forces..."

God entitled us to lean on Him for help! He made us His children. This is a blessing and an entitlement He has given to you. Galatians 4:5 NLT says, "God sent Him (Jesus) into this world to buy freedom... so that He could adopt us as His very own children." Jesus frequently referred to His Heavenly Father when teaching. Because of Jesus' sacrifice, God is now our Heavenly Father and our helper! We are entitled to His help—not in any arrogant or irreverent way, but through sincere faith, trust, and prayer. Hebrews 13:5-6 NIV says, “…"Never will I leave you; never will I forsake you." So we say with confidence, "The Lord is my helper; I will not be afraid. What can man do to me?" And in Psalm 54:4 NIV  “Surely God is my help; the Lord is the one who sustains me. If Jesus is your Savior, then the Holy Spirit is always trying to speak verses of truth like these to encourage you, give you hope, and strengthen your faith!

Fears, whining, complaining, or throwing hissy-fits does not move God to do anything. Blaming the world keeps you in the very pit you want to climb out of! If you'll look around you, you'll see those that don't lower themselves to worldly entitlements but instead, lean on God to become all they can become! When you will invest time in God's Word and let His promises lift you, an encourage and give you strength to take on the desires He's put in your heart, then your confidence will grow and you'll be blessed and become an influence for Him. 1 Corinthians 1:9 (NLT) says, "God will do this, for He is faithful to do what He says, and He has invited you into partnership with his Son, Jesus Christ our Lord" This is what your are entitled to—a covenant relationship to become more than a conqueror through Christ Jesus.

Asa and his troops prayed and leaned on the Lord and worked hard doing what they knew to do.

While doing their part, they saw God's grace and power prevail through them, giving them victory. They knew and acknowledged that Lord was the reason they won. This is a balanced and healthy understanding of entitlement that helps us all live out our lives with diligent effort while knowing we can lean on the Lord with confidence for help with every part of our lives.

Philippians 4:6 (NLT) "Don’t worry about anything; instead, pray about everything. Tell God what you need, and thank him for all he has done."