How the Impossible Becomes Possible


Have you ever heard the old saying, “Seeing is believing?” There are many people who take that kind of stance regarding spiritual things. I only believe what I can see and I can't see God! Seeing is believing for me!  Pride prevents people from admitting that the world they function in, is a world they function in by faith. They cannot see the vitamins at work in their body yet they take them believing that they do good. They cannot see the electricity that turns on a light or that powers their house yet they have faith that flicking the switch will deliver the electricity they need. 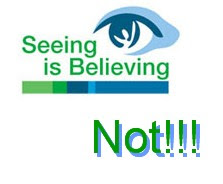 People put faith that the diagnosis that their doctor, the auto mechanic, the weatherman, or the professor of economics is sharing with them is accurate. They put faith in and frequently act upon what they've heard which is hilarious considering how often weatherman are wrong. They have faith that the food in the restaurant they are eating doesn't have salmonella, but that the manager and cook have taken the steps to prevent food poisoning. The list of what people put faith in his endless!
The truth is, people operate in faith more often than they recognize or would admit to. They live a life of believing and acting by faith in what they can't see. They only declare seeing is believing  when it conveniently excuses them from thought and communication about what they don’t care to believe such as: George doesn’t want to go to Hell, therefore he has conveniently chosen to believe there is no such place—because he can’t see it and after all, seeing is believing!
One of Jesus’ own disciples had this attitude and Jesus admonished him for it. Then Jesus told Thomas, "Because you have seen me, you have believed; blessed are those who have not seen and yet have believed." (John 20:29 (NIV) 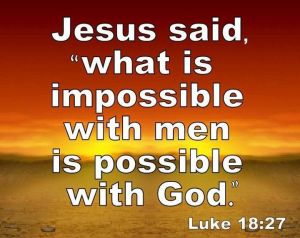 Thomas learned that when it comes to the scriptures and Jesus, faith is higher than seeing to believe. Many of the religious leaders of Jesus day actually saw the miracles that Jesus did but still chose not to believe their own eyes. They were blinded by their jealousies and insecurities of Jesus taking His rightful place of leadership— which they feared would supplant theirs. They saw His miracles of healing but did not believe. As a matter of fact, they even accused Jesus saying, the miracles He did were done through demonic exercises. For them seeing was not believing. Hebrews 4:2 and the gospels reveal that many people saw Jesus heal others. Some believed but some did not—EVEN THOUGH THEY SAW IT WITH THEIR OWN EYES! They heard Him preach and saw Him do numerous miracles, yet they still didn't believe. Hebrews 4:2 says, “For we also have had the gospel preached to us, just as they did; but the message they heard was of no value to them, because those who heard did not combine it with faith.”
You do not have the benefit of seeing Jesus here in the flesh healing people today even though many have seen people healed through prayer in the name of Jesus throughout the ages. If it was a struggle for some to believe in Jesus' days, how much more might it be for you to believe? Let's face it, miracles are mind-blowing. Our belief is only empowered by us knowing the nature of God and His will as revealed in His Word. His Word is the source of faith. It gives us the strength to stand against the unbelief that attacks your heart’s faith.
The Bible is called the Old and New Testament. A testament is two things: It is a covenant and a will. God has created a covenant with man. In the Old Testament it was with Abraham. Covenants are supposed to be a binding agreement between two people—each person obligated to perform.  When God cut his covenant with Abraham, Abraham was sleeping. Cut made the covenant with the obligation of keeping the promise for both sides. Jesus did the same. Why? Because He knew we would not be able to keep up our end and that we'd fail the covenant. And so, He took responsibility for both sides. You know what our part is today? Just to take God at 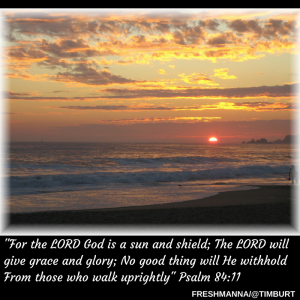 His Word and believe! Jesus said in Luke 18:27 (NKJV) "The things which are impossible with men are possible with God." In Mark 9:23 (NKJV) Jesus said..."If you can believe, all things are possible to him who believes."  Psalm 119:89 (NKJV) says,"Forever, O LORD, Your word is settled in heaven."
I know circumstances come in life that work to steal our faith. We have an enemy of our soul that works to steal our faith. He really can't steal it. He can only get us to doubt it!  Jesus died for you! He established a covenant of promise with you! Let His Word and promises direct and bring trust and peace to your life as you cling steadfast to your faith in Him!
Psalm 84:11 (NKJV) says, "For the LORD God is a sun and shield; The LORD will give grace and glory; No good thing will He withhold From those who walk uprightly."
In His Love,
Pastor Tim Burt


Were America’s founding fathers influenced by Jesus Christ? Rather than debate the topic, why not just look into their personal journals? What did they say? 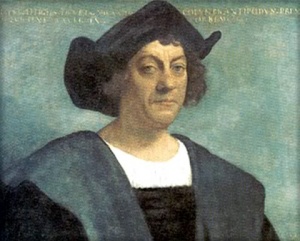 Christopher Columbus in his Book of Prophecies:  It was the Lord who put into my mind (I could feel His hand upon me) the fact that it would be possible to sail from here to the Indies….
There was no question that the inspiration was from the Holy Spirit, because he comforted me with rays of marvelous illumination from the Holy Scriptures … encouraging me continually to press forward, and without ceasing for a moment they now encourage me to make haste.
In a letter written in 1493 to Spain’s General Treasurer Gabriel Sanchez, Columbus wrote:
That which the unaided intellect of man could not compass, the spirit of God has granted to human exertions, for God is wont to hear the prayers of His servants who love His precepts even to the performance of apparent impossibilities. Therefore, let the king and queen, our princes and their most happy kingdoms, and all the other provinces of Christendom, render thanks to our Lord and Saviour Jesus Christ. 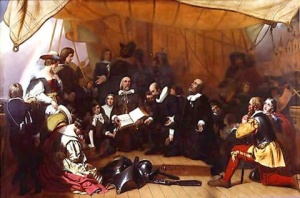 In June of 1630, ten years after the Pilgrims founded the Plymouth Colony, Gov. John Winthrop landed in Massachusetts Bay with 700 people in 11 ships, thus beginning the Great Migration, which lasted 16 years and saw more than 20,000 Puritans embark for New England. In a sermon aboard the ship Arbella before disembarking on the shores of New England, Winthrop said:
We are a Company, professing ourselves fellow members of Christ, and thus we ought to account ourselves knit together by this bond of love….
Thus stands the cause between God and us: we are entered into covenant with Him for this work. We have taken out a Commission, the Lord hath given us leave to draw our own articles….
We must hold a familiar commerce together in each other in all meekness, gentleness, patience, and liberality. We must delight in each other, make one another’s condition our own, rejoice together, mourn together, labor and suffer together, always having before our eyes our Commission and Community in this work, as members of the same body….

We shall find that the God of Israel is among us, when ten of us shall be able to resist a thousand of our enemies, when He shall make us a praise and glory, that men of succeeding plantations shall say, “The Lord make it like that of New England.”
For we must Consider that we shall be as a City upon a Hill, the eyes of all people are upon us.
Benjamin Franklin in Poor Richard’s Almanac offered his personal version of the Lord’s Prayer:
The rest of this post can be read from it's origin at Beliefnet: Did Jesus influence America’s Founding Fathers?
http://www.beliefnet.com/columnists/news/2012/05/did-jesus-influence-americas-founding-fathers.php