Maturing in Christ is a Wonderful Thing

A nice young man who had been attending my monthly men’s breakfast asked if he could come into my office and talk with me. He had recently changed a great deal of his life and wanted to make sure he was on a right track with God. As we talked, he shared the changes he made in his life.

He had been brought up in a good Christian home that when he was younger, he perceived as strict. As he became a young adult, like so many others, he wanted to decide for himself what he believed and what was right for him. He began experimenting with what the world had to offer—primarily in the fun department.

He had wanted to cut loose from his parent’s leash and live his own life. I asked him how that worked out for him. His short response was, Not so good. In the past nine months he had rededicated his life to the Lord and his life was taking a slow steady turn for the good. He had come to realize that his friends that didn't care about the things of God were the greatest drag on his life. Consequently, he was making changes in that area. He had re-engaged with church and was making some great new friendships. He was excited about making good choices and the direction his life was headed. I was truly excited for him and I’m sure his parents were rejoicing!

We laughed about the thought all teenagers think at some point—I can’t wait till I’m an adult so I can do what I want. 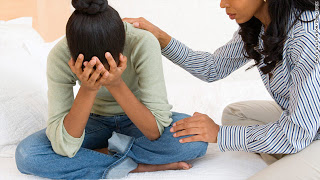 It takes insight from God to realize that not getting to do everything that appeals to your flesh is something that never goes away. It will always be there and restraint is just a part of life.

The Bible calls sin bondage and slavery. It calls the life in Christ freedom yet we become slaves to Christ. 1 Corinthians 6:19-20 NLT reveals, “…Don't you know that your body is the temple of the Holy Spirit, who lives in you and was given to you by God? You do not belong to yourself, for God bought you with a high price. So you must honor God with your body.” We than at some point, come to learn the truth of 1 Corinthians 7:22 NLT “And remember, if you were a slave (to sin) when the Lord called you, the Lord has now set you free from the awful power of sin. And if you were free when the Lord called you, you are now a slave of Christ.”

As "slaves of Christ," we are completely free to make all the right decisions on our own. The love of Jesus frees us to make good and right decisions motivated not by threats or consequences, but by God's love and goodness, and by our new purpose-filled life. 1 Corinthians 4:20 from the Message Bible puts it this way. "God's Way is not a matter of mere talk; it's an empowered life." 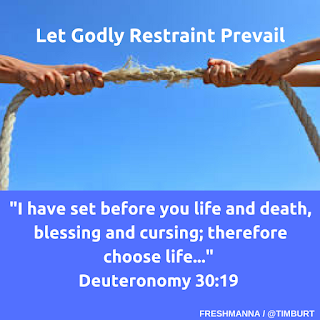 As this young man and I talked, I told him that I had experienced much of what he had. I also told him that I had come to embrace restraint, and correction, and yielding to what I know is good and true. Fighting God only prolongs the good and the blessing He wants for us. Embracing His ways empowers righteous living that have the consequence of greater and greater blessing! We are not children. We should cast off childish thinking and grow up not because someone is making us, but because it's good and God's way!

Proverbs 15:32 (NLT) "If you reject discipline, you only harm yourself; but if you listen to correction, you grow in understanding"