Here's How You Get Victory Over Discouragement!

Do you want to know what two things Satan thinks about over everything else? The first is destroying people's lives. His original name was Lucifer and God created him the most beautiful of all creatures. He was created to serve God but fell to His own pride—this before man was ever created. He tried to exalt himself above God and the rest is history. (You can read more in Isaiah 14) Hell was created for him and will be his eternity. You were created in the image of God and this world was created by God. Because of that, he is out to destroy mankind and all God created and works continuously to do so through pitting people against each other. As you can see, it works well. That is why God teaches us in Ephesians 6:12 that our fight isn't with each other but against Satan. 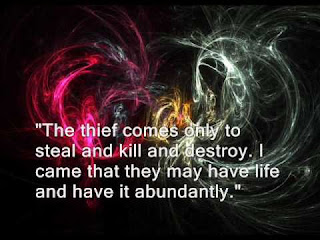 The second things he continuously thinks about is his impending and eternal doom! He knows his destiny is published for all mankind to see. That's one reason he doesn't want people reading the Bible. He knows his time is coming. He is terrified of it. Revelations 20:10 TLB reveals it saying, "Then the devil who had betrayed them will again be thrown into the Lake of Fire burning with sulphur where the Creature and False Prophet are, and they will be tormented day and night forever and ever." Satan will soon be tormented day and night for ever and ever. Hell was created for Satan and the fallen angels—those that followed his rebellion against God. Hell wasn't created for man. Earth, Heaven, and eternal fellowship with God was His intended plan. Because of man's free will, he can follow Satan there by his choosing, but, Jesus died so every man could believe in Him and be delivered from following Satan like some of the deceived angels did. Satan knows his time is coming.

When Jesus would come to minister to someone possessed with a devil something would happen. The demons would cry out with fear. You see it in Matthew 8:29 (NKJV) "And suddenly they cried out, saying, "What have we to do with You, Jesus, You Son of God? Have You come here to torment us before the time?" Satan and his demons know there is an appointed time.

As a Christian, you are the temple of the Holy Spirit. You represent Jesus in the earth. When you put up a fight and stand in the authority of the name of Jesus, and when you resist and rebuke demonic forces from attacking your life, then your position of faith, confidence, and spiritual strength grows. You progressively become a spiritual prizefighter. You were never meant to be a doormat for Satan to wipe His feet on. You are to "resist the devil and he will flee from you." As you put up that fight, you especially need to cast out wrong thoughts and feelings that are contrary to God's Word. Feelings are great when they respond to the truth of God's Word, but when feelings are steered by the discouragement from demonic attacks, it's time to take authority over them. 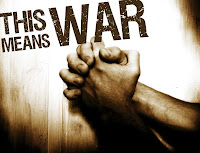 I remember some years ago we entered into a fight in the Spirit over our granddaughter's life. There were many rounds in this fight. It was time for me to step into the ring and take my authority. Want a play-by-play from ringside? It usually went something like this.

Okay devil, you want a fight? A fight you're going to get! First of all, let's get something straight. You aren't having my granddaughter. She belongs to us, not you. My daughter and son-in-law have always honored God and their parents and the promise of God's Word says “all will go well with them.” Did you get that devil? All will go well with them! You are not my God. You are a liar and Jesus said you are the father of all lies! So, listening to you is pointless.

Secondly, you are not a credible source of information because you are a liar. You try to pick out my faults to disqualify me from blessing, but the truth is, my sins have been washed away. Jesus sees me as His righteous. But you, ha—you will spend all your days in the lake of fire! That's your destiny—not mine! I will spend all my days with Jesus praising Him in the company of those angels that were smart enough to follow God instead of you. 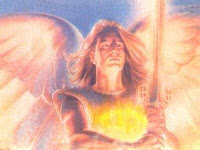 Thirdly, I've been adopted by God and made His child. I've been filled with the Holy Spirit and I have authority over you. God says my weapons against you are mighty. 2 Corinthians 10:4 says, "For the weapons of our warfare are not carnal but mighty in God for pulling down strongholds, casting down arguments and every high thing that exalts itself against the knowledge of God, bringing every thought into captivity to the obedience of Christ. So, with these mighty weapons, I cast you down and out! I know you are a thief but Psalms 35:10 says, God rescues those who rob from me. So devil, my God who rescues me from every attack too strong for me! Madeline will live and not die. Psalm 139:14 says that she was "reverently and wonderfully made!" I know His angels are here to help us because Psalms 34:7 says, "The angel of the LORD encamps around those who reverence Him, and He delivers them."

There is nothing like declaring your authority in a battle to stir your emotions toward the goodness of God. Jesus defeated Satan in the desert with the truth of God's Word. Satan would try to tempt Him but Jesus would step into the ring and say, "It is written, that man shall not live by bread alone, but by every word of God." (Luke 4:4) After Satan was defeated verse 13 says, "And when the devil had ended all the temptation, he departed from Him for a season." Satan will give up for a while but he will be back so we have to stay ready. It then goes on to say that as soon as Satan quit and Jesus had defeated him, then... "Jesus returned in the power of the Spirit." Do you want to return in the power of God's Spirit? There is nothing to refresh you like winning a good fight against the devil. This is how to have victory over discouragement. You resist Satan with the promises of God’s Word. The bonus is, you become refreshed and empowered in the Spirit. Step in the ring and try it for yourself today! Make it your daily workout! Praise God and defeat the devil.