Developing An Excellent Spirit in You

When we read about great godly men and women from the Bible, we often see them as special, and with character qualities that only they could possess. Christians too easily discredit themselves from being able to have those qualities. Godly character qualities do not have to be unique to great Bible characters only. They can be formed by the Holy Spirit in you! We see that Daniel carried what God called, “an excellent spirit.” In Daniel 6:3 NKJV we read, “Then this Daniel distinguished himself above the governors and satraps, because an excellent spirit was in him; and the king gave thought to setting him over the whole realm.” 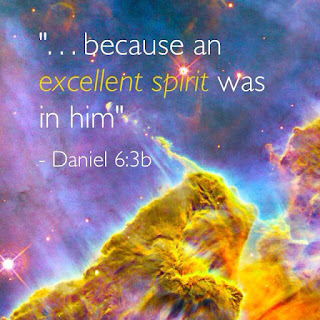 Daniel’s godly character qualities resulted in him being called by God—one with an “excellent spirit.” That is attainable by each one of us. As a matter of fact, it’s God’s desire for that to happen!

There are three things that contributed more than anything else to Daniel's excellent spirit that will help produce the same spirit in us. The first is learning God’s Word and letting it shape the attitudes of our heart and boundaries of our behavior. The second is to comprehend and live in true humility. And the third is living in a continuous state of prayer. These three attitudes continuously working together will produce a fertile ground in your heart for the Holy Spirit to work heart transformation that produces an “excellent spirit.”

Let’s make the connection between Daniel’s excellent spirit and God’s Word, humility, and prayer. Daniel 6:10 NLT says,“But when Daniel learned that the law (an evil law that said you could only pray to King Darius) had been signed, he went home and knelt down as usual in his upstairs room, with its windows open toward Jerusalem. He prayed three times a day, just as he had always done, giving thanks to his God.”

Daniel loved and lived by the Word of God. Daniel 9:4 (NLT) says, "I prayed to the LORD my God and confessed: “O Lord, you are a great and awesome God! You always fulfill your covenant and keep your promises of unfailing love to those who love you and obey your commands." Daniels love for God's word taught him there was only one God to learn of, worship, and pray to! His knowledge of the Word of God created that attitude and obedience in his life. Because of this, he knew he could not bow and pray to King Darius.

Then you read that Daniel prayed before the Lord “just as he had always done.” Prayer wasn’t a duty with Daniel. Prayer to him was more important than anything—it was like breathing and lifeline to God. He saw God as his help in everything he put his hand to. Because of that, he was always in an attitude of prayer. That attitude contributed to him having an “excellent spirit.”

Daniel was a role model of true humility. He was promoted above everyone. He was not looking for that. It came to him because of his humility—knowing that God was his success at every step. He did not glory in himself as the success. He gloried in God being the source of his help. That’s the opposite of most people. Their success often inflates their ego and self-importance and God slips into the background. Most people who obtain success believe they are something special. Daniel was not like that. He loved God. He thanked God at every step for every good thing—thus his kneeling down to formally pray each day. But his prayer was not limited to those three times. It was an attitude that was as continuous as his dependency on God. These qualities in him are what God called an "excellent spirit." What a lesson to be learned! 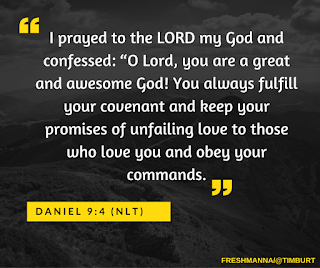 Now let me bring this into today's reality. As you read the story of Daniel, you will see that though he had this excellent spirit, he did not live in a bubble. He faced tribulation for His love for God. Righteousness and success are always surrounded by jealousy. Evil, jealous men tried to continually make Daniel’s life miserable. I mean truly evil plots that would have unraveled 99% of most people's life. Daniel kept his heart before the Lord and in God’s hand. He never missed a beat. There were many attacks on his life despite his prayer life, yet God kept lifting Daniel up, kept protecting him, and kept using him and kept blessing him.

Daniel 1:9 (NKJV) says, "Now God had brought Daniel into the favor and goodwill of the chief of the eunuchs." Prayer doesn’t eliminate every attack of the enemy, but loving God's word, walking in the humility of your dependency on God, and being constant in prayer, will keep you in His divine favor and bring God's deliverance and blessing again and again. It will shape an “excellent spirit” within you. It’s not a magic formula. It’s what comes when you stay before the Lord as He shapes your heart with his excellent godly character and goodness flows like a river from it.