Keeping it Real With God and Others!

Like you, my life is filled with many vivid memories that I’ll never forget. I remember when I was 24 years old and a Flight Attendant at Northwest Airlines. I was on a flight from Hawaii to San Francisco when I met this married, very sweet, bubbly, kind and exuberant Flight Attendant. She was interesting to talk to and had one of the most fun personalities of any person I had ever flown with. I was attracted to her―not in the romantic sense, but to her as a very unique and special person. I found myself wanting to engage in conversation with her.

We both had scheduled layovers in San Francisco that night. In a transportation van taking us to the hotel, she had encouraged me to watch this special television show that was going to be on. It was a Billy Graham special. I had heard the name but didn't know who he was or what the show would be about. 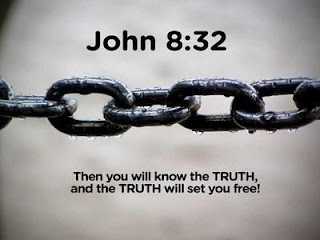 When I had got to my hotel room, I forgot what it was that she had told me to watch. I called her room to ask her again. When I had her on the phone I found myself asking her a question. Sharon, you are one of the most joyful people I have ever met. What makes you so happy? Before she answered, she asked me a question. She said, Tim, do you believe in God? I told her I did. She asked me what I believed. I proceeded to give her the biggest bunch of mumbo-jumbo religious philosophy that you've ever heard in your life. When I look back, I'm surprised she didn't hang up or throw up. Instead she patiently and respectfully listened to what I had to say.

Finally, I asked her what she believed. She asked me to open the nightstand drawer next to my bed. She told me, Inside you'll find a Gideon Bible. As I pulled it out, she said she’d do the same. She pulled out the one in her nightstand and then told me what pages to turn to. It was a good thing she could direct me by page numbers rather than scripture and verse because I wouldn't have had a clue what she was taking about. I had never cracked a Bible in my life. 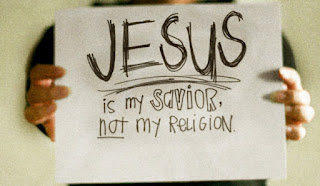 She told me how to find chapters and verses. She had me read them to her. She then asked me if I understood what I just read? After I read each verse, she expounded on and explained each one. She helped me turn from verse to verse. We read about God’s love, about sin and how God would forgive me of it by receiving Jesus into my heart as Lord and Savior. When she was done I suddenly knew something very important. Somehow, in my heart, I knew that my philosophies and beliefs were bogus and that I had been deceiving myself. I was experiencing a moment in life incomparable to any other. I was having an encounter with God, yet wouldn't have known to describe it as that.  I was instantly and acutely aware that I was bankrupt in knowing God, but sensed that she knew and very much belonged to God.

She asked me if I would like to become saved and give my life to Christ. I didn't know what that meant but again, she patiently explained it to me. Together over our hotel-room telephones, we prayed. She led me in prayer as I repeated it asking Jesus into my heart. From that moment, something within me had changed. The first thing that I could identify, was having this loathing for the self-deception I’d kept myself in. I had lied to myself for too long and it was time to build a life on truth―the truth of God's Word.

Why am I telling you all this? Because all too often I run into people who remind me of the way I used to be―holding onto a lie and a life that they know isn't pleasing to God. They may try to con me about how much they love God in the same way I tried to convince Sharon how religious I was. 2 Tim 2:19-21 NIV helps cut to the chase. "...The Lord knows those who are His," and, "Everyone who confesses the name of the Lord must turn away from wickedness." .... If a man cleanses himself... he will be an instrument for noble purposes, made holy, useful to the Master and prepared to do any good work." 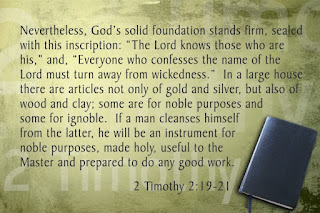 I am talking about this today for my good, but I hope yours also. I have to ask myself continuously, Is what I'm doing or participating in pleasing to God? Am I letting any more self-deception creep into my life? Am I trying to look godly on the outside but have something less pure going on within? I can't con God. I better examine my heart. If I see something in my life that I know is outside the will of God, I must repent, pray for God’s grace and help, and get it right. When I cooperate with the Holy Spirit, then and only then can I purge myself of inappropriate and ungodly thoughts and behaviors. It is then that change happens and I conform more to His image. It is then that I become an "an instrument for noble purposes, made holy, useful to the Master and prepared to do any good work."

It was one thing to live in self-deception 38 years ago when I didn't know the Lord. It's another thing to fake it before others and act as though God doesn't know what's going on. I won't do it. I have to get it right. I want His best so that He can use me for noble purposes each and every day. Then I'll be keeping it real with the Lord and myself!

Philip. 2:12 (NLT) "Dearest friends, you were always so careful to follow my instructions when I was with you. And now that I am away you must be even more careful to put into action God's saving work in your lives, obeying God with deep reverence and fear."