The Lord Will Calm Your Heart!

Years ago I was on a trip to Scotland and Ireland. You haven't seen green grass until you've been to Scotland and Ireland. They have some of the most beautiful countryside and rolling green hills I have ever seen. You also see many sheep. They graze in these green never-ending pastures. Places like this also make me think about Psalm 23:2 "The Lord makes me to lie down in green pastures: He leads me beside the still waters. When I am in places like this, I can't help but see God and all of His creation in everything I gaze upon. I think, "God's will is to lead me to these kinds of places and atmospheres. When He does, it illuminates how magnificent and powerful He is and that the Creator of all these things loves me as His child and wants to lead me beside still waters." 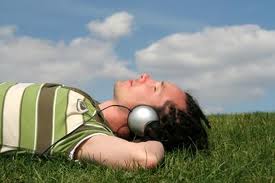 Green pastures and still waters may be more the exception than the experience for most of us. Someone recently said to me, "It seems like there is always something negative going on that wants to spoil my day or season of life."  The truth is, we do have an enemy of our soul. His name is Satan and He hates God and anything that represents God. Jesus said that this enemy has come to kill, steal, and destroy. Much of the world has just watched that with the destruction and death from the tornadoes. Did God cause or allow that? Of course not. We live in a defiled world. The Bible says that because of the choices of man, Satan has become the god of this world. Killing and destruction is what he attempts to do. Even when people pray for help, for too many, it's like breaking a wishbone. They have no real faith in God or in His love and divine protection. God is moved by relationship in Jesus and by faith in His Word. In the absence of that, the devil has a heyday and tries to destroy. Death and destruction are his playground.

God has a plan even for those surrounded by destruction and death. We also see that in Psalms 23:4. "Even when I walk through the shadow of death, I will not be afraid. For You, O Lord are close with me. Your rod and your staff protect and comfort me." 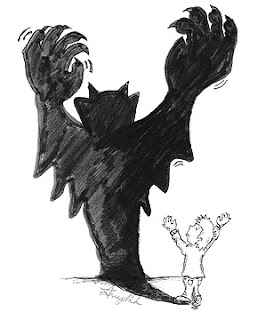 I'll tell a bad story on myself. I was one of ten children. When I was about seven years old, I lived in a bedroom with one other younger brother and two younger sisters. I was the big shot because I was the oldest of us four. At night when we were in bed and it was dark, I would pull out my flashlight and make shadows of a spider on the wall. Those shadows scared the ba-geebers out of my younger siblings. I thought it was funny. I regret that now. It's interesting that there really was no real danger, just shadows. Shadows produced fear.

The Lord said that even as we walk through the shadow of death, we did not have to be afraid because He was with us. What is the shadow of death? It's the fearful or negative mental images that Satan continually tries to bombard our minds with seducing us into states of panic, or anxiety, or cares.The more we think upon them and "see" them in our mind the worse they get. They become shadow of death!

God has not abandoned us in these hard places. His will is to comfort us and lead us to green pastures and still waters. Psalm 23:4 says, "Even though I walk through the valley of the shadow of death, I will fear no evil, for you are with me; your rod and your staff, they comfort me." 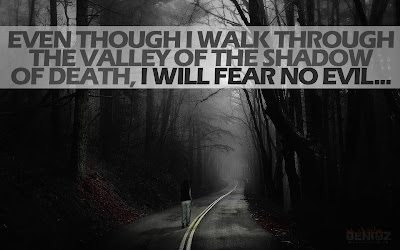 When we will quiet our soul and spend time with Him and learn of His promises, the voice of the Holy Spirit will rise up from within and comfort us. His Words will make our soul still and the waters quiet. They will cause fear to go as God’s greatness, power, and promises are magnified within our hearts.

When I was in those fields of Scotland, surrounded by what seem like oceans of green grassy hills, God became infinite in size and my cares and problems began to fade away. We don't have to go to Scotland to experience this. We just have to take in the power of His Word and let it still our heart and soul. He loves us you know! Very much! Lean on He and His Word and trust Him!