Jesus is Coming Back So Stay Hot For God! 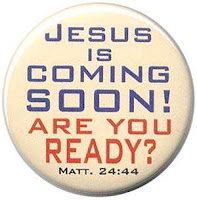 There was a time when Jesus was teaching his disciples about what things would be like before His return to this earth - and event that will happen shortly before the end of this world as we know it. The disciples asked Him a question that we see in Matthew 24:3. “Jesus’ disciples came to Him privately and asked, 'When will all this take place? And will there be any sign ahead of time to signal your return and the end of the world?'"  One of the signs Jesus told them about was that “Sin will be rampant everywhere, and the love of many will grow cold. But those who endure to the end will be saved, preserved, and protected. ” Matthew 24:12-13 (NLT)

When Jesus said sin would be rampant – He was referring to every kind of sin – the disregard for earthly laws and the disregard for the instructions, guidelines, and boundaries that His Word gives us to live by. He was talking corruption on large levels, business and personal dealings without integrity, evil speaking about others without regard for how it might hurt them, a freedom to lie and cheat as a part of every day life, about sexual immorality and perversion increasing to such a level that it redefined all sexuality. He was talking about unfaithfulness and disloyalty in relationships. He was talking about the increase of selfishness and greed. He was saying that this increased evil would so surround us, that if we were not careful, it would discourage us to unprecedented levels causing our own love to grow cold. When a person’s love grows cold, everything looks bleak and life doesn’t look worth living. I pray that this has not become the case in any of your lives.

When things God created for good are misused, then they becomes a perversion. When something is perverted from its original use, instead of having a good result, it produces a curse – the reaction to its misuse. When I was a child, before the days of circuit breakers, I stuck a bobby pin in an electric socket. It blew the socket starting it on fire and I was blown backwards. By the grace of God I was hardly hurt, but, I could have been electrocuted. It wasn’t the fault of electricity – a good thing. It was the misuse on my part of that electricity – a bad thing.

God knows what He created, how it is to be used, and the boundaries for it. Think about words. They can produce great joy or they can hurt, maim, and bring destruction. Consequently, God instructs us to use our words wisely. Proverbs 18:21 (MSG) says, "Words kill, words give life; they're either poison or fruit—you choose." Instruction and boundaries are created with the ultimate goal of producing blessing and protection. His Word gives us instruction with the intention to bless us and protect us from the curse of misuse.

A more recent CDC study estimates that one in four (26 percent) young women between the ages of 14 and 19 in the United States – or 3.2 million teenage girls – is infected with at least one of the most common sexually transmitted diseases. This is just one age group mentioned but the problem abounds throughout all groups and around the world. It is epidemic. This is the result of the perversion of God's word when it comes to sex; or more simply said, this is the result of fornication - sex outside of marriage.

The greatest problem that comes from escalating sin in the world is the feeling that it’s so much bigger than your ability to have an affect in slowing it down or stopping it. That feeling usually leads to a caving into it. This is why men and women are becoming slaves to pornography, casual sexual relationships, and every kind of sexual experience imaginable – all perversions of God's intention for sex. It was created for a husband and wife to experience for their purpose of enhancing their love and intimacy and for procreation. This is not archaic. This is the purpose of its creation. Misuse outside of that it leads to the dismantling and destruction of lives – sexually from disease, emotionally from hurt and pain, and mentally from the torment and confusion of broken relationships outside the boundaries of God’s will, and the degradation of human dignity. 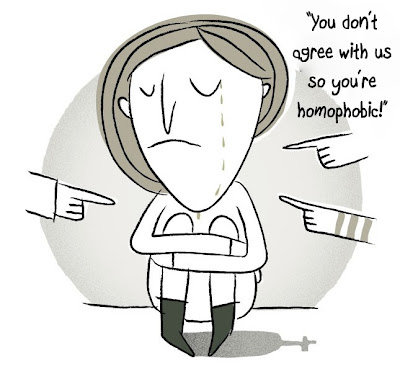 When those that love God's word work to create appropriate restraints within society's legal system and in creating ethical standards, the violators of God's way resort to intimidation and bullying or bashing to get their way. The evil of name calling and slandering of anyone that does not take a more “open and liberal view of homosexuality begins.” We are called, “archaic,” “backwards,” “out of touch,""homophobic,"  and many vile names that I cannot print. There has been a bombardment of intimidation that has led to many people’s acceptance of homosexuality and other forms of sexual activity outside of marriage. People have been pressured, bullied, called names, and intimidated into the acceptance of something sinful even when deep in their heart, they know it is wrong.

The answer to this is to have personal convictions based upon scripture and stand up for them. Learn to hate sin in your own life. Learn to love God more than your own fleshly desires. In learning to hate sin, that does not mean become judgmental of others or self-righteous. We are to love sinners the same way God loved us in our sin. Jesus died for our sins. But it doesn’t mean we have to agree with, or be tolerant of sin in our society. First prayerfully stand against it in your own life. Then humbly, kindly, and prayerfully influence others in God’s love and ways. Then take a stand against evil by resisting it verbally and with action. Write letters, write blogs, write your television stations, your politicians – in other words, take a stand against evil wherever you can. Psalm 97:10 says, “You who love the Lord, hate evil! He protects the lives of his godly people and rescues them from the power of the wicked.“

Your resistance will help protect you and strengthen you from what Jesus said will happen – “the love of many growing cold.”  He also said, “He who stands firm (in what is right) to the end will be saved, preserved and protected.” Matthew 24:13