A Move of God Continues: Christian Support for Israel

Renee and I are in Washington D.C. to participate in the Christians United for Israel Washington Summit - an organization that has grown from a few thousand to over a million people in just six years. We've joined with over 5,000 other Christians, representing millions of Christians from around the United States who love and support Israel. 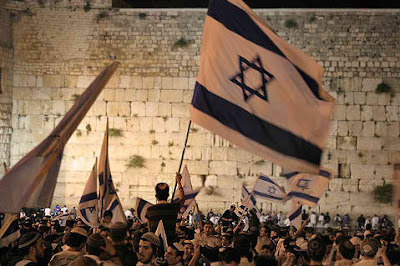 There are many Christians from various countries around the world and even many Jews from the U.S., Israel, and other countries who came to behold what many consider a modern day miracle and move of God in the earth today – mass united Christian support for Israel.

I am the Minnesota State Director for CUFI (Christians United for Israel) and also the Administrative Director for our four state region (Minnesota, Iowa, Illinois, and Wisconsin) under Pastor Mac Hammond, the Regional Director of these four states and Executive Board Member. We are here with a wonderful contingency of almost 200 passionate supporters of Israel from Minnesota plus many others from a four state regional area. We are hearing from national and international speakers, including Pastor John Hagee, Israeli Prime Minister Benjamin Netanyahu, Israeli Ambassador Michael Oren, Frank Gaffney - President of the Center for Security Policy, Senator Joseph Lieberman, and many more speaking in large general sessions and many workshops.

Tonight - Tuesday night, over 5,000 came together to celebrate "A Night to Honor Israel.” It is a dinner event so celebratory and powerful, it is hard to come up with words to do it justice. Congresswoman Michele Bachmann was the keynote speaker speaking on the threats that face Israel and the United States and why our influence and action is so very important. If action is not soon taken, the world will have to live with trying to contain a nuclear Iran who has openly and repeatedly stated that it is determined to destroy Israel and the United States. Her speech was powerful to say the least. She was received with overwhelming warmth and a great enthusiasm. The crowd broke out in cheering, clapping, flag waving, and even dancing throughout the “Night to Honor Israel” event.

Today, over 4,000 CUFI attenders have appointments with almost every Congressperson and Senator on Capitol Hill to meet with and discuss U.S. support of Israel – our greatest ally in the world. Approximately 90% of the Congresspeople and Senators are scheduled to meet with us, with only a small percentage refusing. The majority are in support of Israel and pledged their continued support. Of course, it’s amazing that any Congressperson or Senator would refuse to meet constituents from their state who come all the way out to Washington to meet with them, but there are a few.

Every year, I meet a number of Jewish people who have heard what we are doing and come out to our events - even Washington DC - to see for themselves. They are almost always astounded with shock, surprise, and abounding joy from beholding Christians who work to expose anti-Semitism while showing great love and support for the Jewish people and Israel. For two thousand years, they were only too familiar with persecution, hatred, and apathy of anti-Semitism that allowed the Holocaust to happen. They had always thought that Christians hated them because of the persecution of Jesus, and to some extent that had been true! The slaughtering and hatred of the Jews from the Crusades through the Holocaust is history that cannot be altered but that should absolutely be apologized for by the Christian Church. This is still one of the greatest sins and errors of the Christian church today.

Jesus had words at His time of death for those that came against Him that reflected His heart for all mankind. Jesus said, “Father, forgive them; for they know not what they do.” (Luke 23:34) Whether some slapped and spit on Him and drove the nails in His hands and feet, or lived their life astray from His will, each and every one of us needs redemption from our sins. As scripture says, “we have all gone astray.” The Apostle Paul reminds us that we all needed His mercy saying, “But God commended His love toward us, in that, while we were yet sinners, Christ died for us.” (Romans 5:8)

The Jews have never been the enemy of God. They, like all mankind, have at times gone astray and like all mankind, need to work out their salvation with fear and trembling. God chose them first to be His children and the apple of His eye. Christian support for the Jewish people and Israel is a mandate of scripture because we are to love what God loves and God loves the Jew and Israel. They are very much a great part of God’s plan and big picture as the Apostle Paul revealed in Romans 11:24-27. “After all, if you were cut out of an olive tree that is wild by nature, and contrary to nature were grafted into a cultivated olive tree, how much more readily will these, the natural branches, be grafted into their own olive tree? I do not want you to be ignorant of this mystery, brothers, so that you may not be conceited: Israel has experienced a hardening in part until the full number of the Gentiles has come in. And so all Israel will be saved, as it is written: "The deliverer will come from Zion; He will turn godlessness away from Jacob. And this is my covenant with them when I take away their sins." He loves the whole world but He has a specific plan for Israel.

Israel is also America's greatest ally in the earth today. Israel is the only true democracy in the Middle East. Israeli Palestinian citizens have more rights in Israel than in any other Arab nation. There is democracy and religious freedom in Israel while Christians are persecuted and murdered throughout the Muslim world for their faith. In the Muslim world and countries, they have no choice over their faith. They believe or they die. If they convert from Islam, they die.

Israel also stands against our enemies without ever asking for any of our soldiers to help them. Our best line of defense and best use of monies toward our own national defense is by investing in Israel’s support and defense. They are our first line of defence.

Beyond all that and on a spiritual level, Israel is a land that God has given the Jewish people as their inheritance. 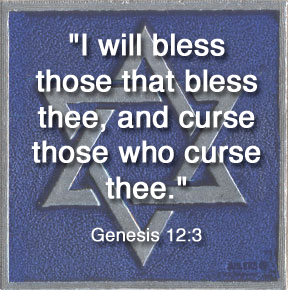 It is the only land God has given to anyone in the earth. And let us not forget; there has never been a nation that has been an enemy of Israel that has survived throughout the ages. Why is that? God said in Genesis 12:3, “I will bless those who bless you and whoever curses you I will curse; and all peoples on earth will be blessed through you." This is an eternal fact and truth. The U.S. is blessed because of its love for the gospel and because of its support for Israel. We can never let any administration undo that. Be a voice of support for Israel today and pray for her peace always. You will be blessed for it!